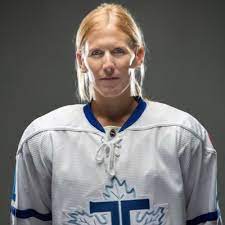 Jessica is the first openly transgender woman to play professional hockey in North America, and one of few in professional women’s sports. She fights for equality for not only trans athletes in sport, but for all women’s sports. Jessica has played hockey her whole life and has seen many facets of the game.  She played boys travel hockey growing up, and later played women’s hockey after her transition. She’s seen firsthand how important it is for hockey culture to change toward more inclusion and past just being performative. Jessica’s story has been published in Bob McKenzie’s “Everyday Hockey Heroes Volume 2” and she shares it in hopes of opening minds and creating positive change in the sport she loves.