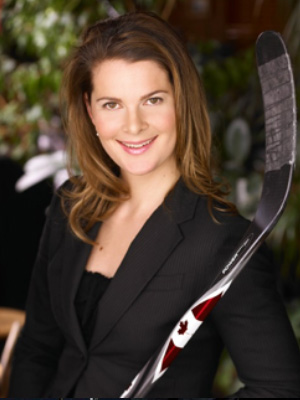 Jennifer Botterill was a member of the Canadian Women’s Hockey Team from 1997-2011 and has attended 4 Olympic Games. She is a three time Olympic Gold Medalist (2002, 2006, 2010) and an Olympic silver medalist (1998). She is a five time World Champion and was twice named the most valuable player at the World Championship tournaments.

Jennifer is a graduate of Harvard University and completed her degree with honours. She also played hockey for Harvard and is the only two time winner of the Patty Kazmaier award (given to the top player in women’s college hockey). She still holds the NCAA records for most consecutive games with a point and for most points in a hockey career.

Jennifer is a keynote speaker and works in television with CBC and TSN.