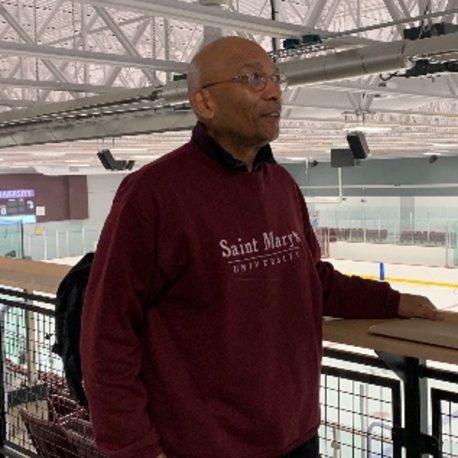 Born in Dartmouth, NS, Bob Dawson was the first Black men’s ice hockey player in the Atlantic Intercollegiate Hockey League with Saint Mary’s University. He went on to be a member of the first all-Black line in Canadian university hockey as well. After Saint Mary’s, Bob went on to earn a Master’s degree in Social Work and later joined the federal Public Service of Canada where he worked for 37 years in career development and talent management, employment equity, and recruitment and staffing. In 2012, the Black Ice Hockey and Sports Hall of Fame Society in Dartmouth, NS recognized Bob for his achievements in and contributions to hockey. Most recently, Bob is known in the hockey community for his work on a policy paper for anti-racism in hockey with Dr. Courtney Szto, Dr. Sam McKegney, and Michael Mahkwa (Bear) Auksi.