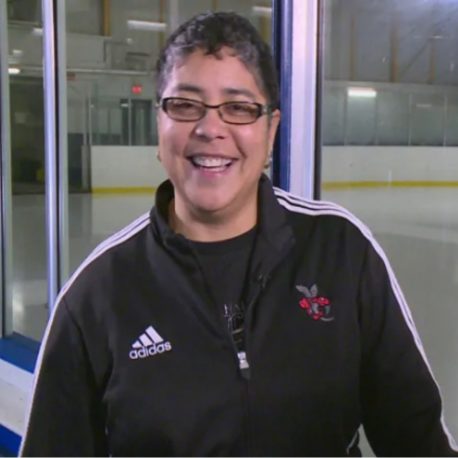 Angela James is a trailblazer of women’s hockey in Canada.  A black athlete who overcame various challenges during her upbringing in Toronto, Angela went on to become one of the first women inducted into the Hockey Hall of Fame in 2010.  She was also inducted into the Black Hockey and Sports Hall of Fame in 2006.  She competed in the original National Women’s Hockey League, represented Canada in the first unofficial women’s world championship in 1987 and went on to become a member of the gold medal National Team at the first official International Ice Hockey Federation Women’s World Championship in 1990. In addition to her competitive playing career, Angela has been active as a referee and served as the Ontario Women’s Hockey Association Referee in Chief. In 2012 the Toronto YWCA awarded her the YWCA Women of Distinction Award for Sport. Most recently, she has been added to the National Hockey League (NHL) Female Advisory Committee. Photo source: CBC