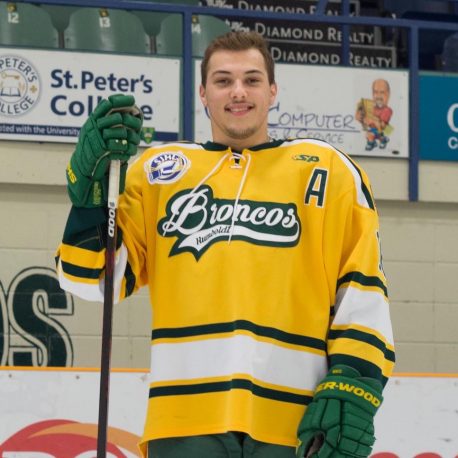 Kaleb is a Type 1 diabetic, which led coaches and scouts to tell him and his parents that he would never be able to play hockey at a high level. Instead, Kaleb used that as motivation, worked relentlessly, and played at the highest level each year of his hockey career. Along the way, he developed a program called Dahlgren’s Diabeauties, which used hockey as a platform to shed light on Type 1 Diabetes and provide support for children with the disease. Jr A hockey landed him in the city of Humboldt, Saskatchewan. A leader on the ice, on April 6, 2018, Kaleb’s life was forever changed while on route to a playoff game in the town of Nipawin. The Humboldt Broncos’ team bus was involved in a horrific bus crash with a semi-trailer truck that resulted in 16 deaths and 13 players left in critical condition. Shortly after getting out of the hospital, Kaleb’s verbal commitment prior to the accident turned to an official commitment to York University as a student-athlete with the York Men’s Lions Varsity Hockey Team, where he is currently attending. He also recently published a memoir titled Crossroads.